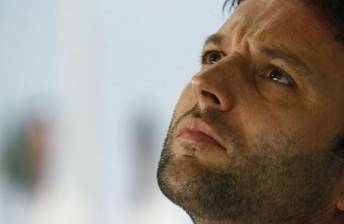 Darren Turner will replace Dan Wheldon alongside James Courtney in the #1 Toll Holden Racing Team Commodore VE at the Armor All Gold Coast 600 this weekend.

It will be the 37-year-old’s V8 Supercars debut

Turner is a two-time winner of the Le Man 24 Hours in the GT1 class, winning the classic race in 2007 and 2008 with Australian David Brabham.

Turner is currently fighting for the 2011 GT1 World Championship, driving a Young Driver AMR Aston Martin. He is second behind the JR Nissan Motorsport pair of Michael Krumm and Lucas Luhr.

In light of Wheldon’s tragic passing at Las Vegas yesterday, Turner is one of three late replacements for the Armor All Gold Coast 600. Tony Kanaan and Will Power have pulled out, replaced by Allan Simonsen and Richard Lyons.

Other IndyCar drivers Helio Castroneves, Ryan Briscoe and Alex Tagliani have confirmed their places on the grid.