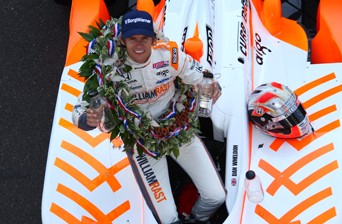 Dan Wheldon has tragically passed away in a multi-car crash at Las Vegas Speedway today.

The 33-year-old Brit was competing at Las Vegas as a wildcard entry, and was due to head to this weekend’s Armor All Gold Coast 600 to drive with James Courtney in the #1 Toll Holden Racing Team Commodore.

Below is Speedcafe.com’s timeline of Wheldon’s achievements in international motorsport competition.

CLICK HERE for Speedcafe.com’s report on the fatal accident. 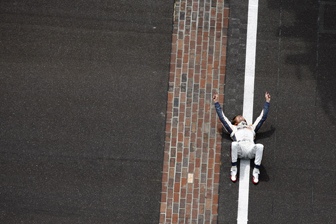 Wheldon celebrates on the Indy bricks

1999 – Having failed to secure a budget to race in British Formula 3, moves to United States of America to compete in USF2000 Championship with John Baytos (Primus Racing). Takes a dominant series victory with six race wins.

2000 – Wins on debut before finishing second in points to Buddy Rice in Toyota Atlantic Championship.

2001 – Competes in Indy Lights Series with PacWest, winning two races and finishing second in the overall standings. Takes Rookie of the Year award.

2002 – Races final two IndyCar events of season with Panther Racing, for which he had been acting as test driver, scoring a best result of 10th at Chicago.

2003 – Misses first two races of IndyCar Season before eventually taking over Michael Andretti’s ride at Andretti Green Racing. Crashes out of Indianapolis 500 with frightening flip in closing stages. Scores third in the final race of the season, cementing 11th in points and Rookie of the Year honours.

2004 – Records 11 top three finishes during the 16 race IndyCar season with AGR. Ends year with three wins and second in standings, having finished third at Indy.

2005 – Wins four of season’s first five races, including the Indianapolis 500, becoming the first Englishman since Graham Hill in 1966 to win the 500. Wins a further two races later in the season and is crowned IndyCar Series champion.

2008 – Repeats previous season performance by winning two races and scoring fourth in the standings. Races the year-ending non-points event in Australia with Panther after making way for return of Dario Franchitti to Ganassi squad.

2009 – Runs full season with Panther for the first time. Finishes second in the Indianapolis 500, his best result of the season, on the way to 10th in points.

2010 – Returns for second season with Panther, again scoring a best result of second in the Indianapolis 500. Ends season ninth in points.

2011 – Puts together Indianapolis 500 program with Bryan Herta Autosport after failing to secure a full-time IndyCar ride. Wins second Indy 500 trophy after thrilling finish. Selected as official test driver for 2012 IndyCar project. Later in the season, is the only driver selected to run for the $5 million prize in the Las Vegas finale, racing for Sam Schmidt Motorsports. Finishes 14th in Kentucky before suffering fatal injuries in a multi-car accident in the early stages at Las Vegas.