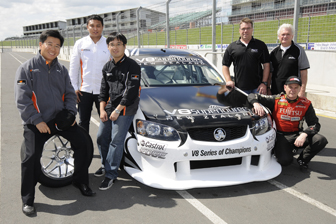 New Zealand’s new V8SuperTourer championship has secured a deal with Hankook as the exclusive tyre supplier to the series for three years, commencing in 2012.

The tyres selected were developed for the German-based DTM series.

All entrants will run on Ventus F200 slick and Ventus Z207 wet tyres that have the same construction and compounds as the tyre exclusively supplied by Hankook to the DTM.

The tyres will be supplied to V8SuperTourers through Hankook’s New Zealand distributor Value Tyres Ltd.

The managing director of V8SuperTourers Mark Petch says that the Hankook tyres were selected after an exhaustive testing process.

“We tested the benchmark European racing tyres used in top-level series’ from around the world, but found the Hankook tyres performed as well or better,” said Petch.

“Hankook’s compounds and construction are world-leading. Where other tyres we tested had limited durability and would begin to blister, the Hankook tyres do not. They certainly exceeded our expectations.” 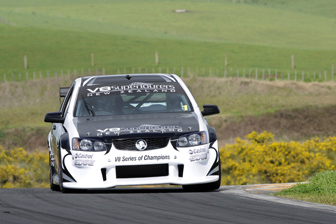 The new front wing on the Holden Commodore prototype V8SuperTourer

“Hampton Downs is very hard on the left-hand rear tyre, and with the torque of the 7.0-litre V8, the rear tyres are pushed quite hard,” Mr Ceprnich said.

“The Hankook tyres performed well, but it was their durability that really impressed. We tested the medium compound, and we were able to test on one set of tyres all day.

“Our testing was in probably the toughest conditions the cars will face, and the Hankook tyres passed with flying colours, showing excellent consistency.”

Hankook race tyre development engineer Roy Cha was involved in the V8SuperTourers testing process and says that he was not surprised by the performance of the Hankook tyres.

“We have spent thousands of hours researching, developing and testing our tyre constructions and compounds across many racing series worldwide,” said Cha.

“The V8SuperTourer chassis is highly developed and an excellent race car. In testing we saw similar results to what we see in DTM racing. Being able to transfer that expertise was a great advantage for Hankook.”

In other V8SuperTourer news, the category has debuted its new front splitter (see image). The new front wing has been designed to give the category a different look to Australia’s V8 Supercars. The class’s new rear wing will be unveiled soon.

Sixteen vehicles will line up on the grid at the first meeting at Hampton Downs Motorsport Park on February 17-19.