Tributes flood in for Dan Wheldon

Tributes flood in for Dan Wheldon 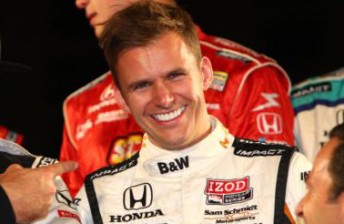 Dan Wheldon was killed at Las Vegas this morning

Tributes from all around the globe have flooded in for IndyCar nice guy Dan Wheldon.

The 33-year-old Brit was killed in a horrific multi-car accident at Las Vegas today.

Leading the charge of tributes was Australian Formula One driver Mark Webber, who was saddened at the loss.

“So sad to hear we have lost a legend of our sport Dan Wheldon,” Whincup tweeted.

“My thoughts are with his family and friends.”

Patrick Long, who will compete in this weekend’s Armor All Gold Coast 600 with Fabian Coulthard, paid tribute to his friend.

“Thank you Dan for all that you’ve given to this sport. Godspeed,” Long said.

“We will never forget you and all the laughs you brought us.”

IndyCar rival Ryan Briscoe was part of the five lap parade held at Las Vegas after the fatal crash. Briscoe was due to suit up in Toll Holden Racing Team colours with Wheldon on the Gold Coast this weekend and struggled for words after the parade.

“I don’t have words for the tragic loss of Dan today. He was a good man and will be missed by all of us,” Briscoe said.

“The five lap parade was a nice touch and very emotional from inside the race car. Looked like World War 3 hit turn 2 as well.”

The Indianapolis Motor Speedwayhas  also paid tribute to Wheldon in an official statement.

“Most importantly, he was a fantastic husband, father and man – a good friend to so many in this sport. His memory will live forever at the Speedway, both through the magnitude of his accomplishments on the track and his magnetism off the track.”

See below for the announcement of Wheldon’s passing and the five-lap parade held at Las Vegas.

See below for Wheldon’s victory at the Indianapolis 500 earlier this year.