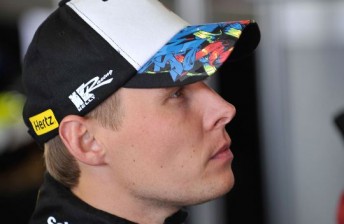 Former IndyCar Series Champion Tony Kanaan has opted out of racing in this weekend’s Armor All Gold Coast 600 following the death of Dan Wheldon this morning (Australian time).

CLICK HERE for a summary of Wheldon’s remarkable career

Kanaan, who drove alongside Wheldon at Andretti Green Racing during the mid 2000s, will be replaced in Jason Bargwanna’s Jana Living Racing Commodore by Allan Simonsen.

The Dane raced alongside Greg Murphy at Kelly Racing in the recent L&H 500 Phillip Island and Supercheap Auto Bathurst 1000, finishing third in the latter race.

While V8 Supercars had intended to prohibit endurance co-drivers from racing as internationals in the Gold Coast event this year, the extreme circumstances have seen both Simonsen and Irishman Richard Lyons (CLICK HERE for separate story) permitted to compete.

“I read the news about Dan Wheldon on the internet this morning after getting a call from my son,” explained Jana Living Racing team co-owner Brad Jones. 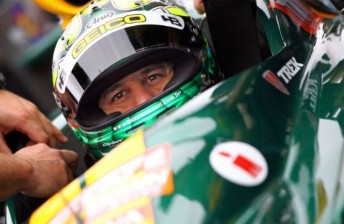 “I couldn’t believe the accident. I knew that he (Wheldon) and Tony were quite close after they drove together at Andretti Autosport. His mentor, Steve Horne, called me to say Tony needed time to grieve this morning and I totally understand that. I’ve lost people close to me and, whether expected or unexpected, it’s a terrible thing.

“I was extremely excited about working with Tony Kanaan but I think we’ve got a great replacement in Allan Simonsen.

“He did a fantastic job with Murph to finish third at Bathurst and I’m sure his style and personality will fit in perfectly at BJR.”

Simonsen, who finished equal fifth in the GTE Class of the Le Mans Series aboard a Hankook Team Farnbacher Ferrari this season, emphasised the difficult nature of the situation for all involved.

“Any fatal crash is absolutely devastating,” he said.

“I raced European karts against Dan; it’s just so sad and a very difficult situation for everyone. There are a lot of people who have been affected by this.

“I have to thank Kelly Racing for the clearance in allowing me to race with Jason Bargwanna this weekend. After finishing third with them at Bathurst, I had to run this past them. That, and knowing Jason and other members of the team, made it quite an easy choice.”