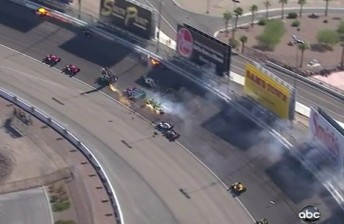 An aerial view of the accident

A major 13-car pile-up has seen the final round of the IndyCar Series red flagged at Las Vegas.

The accident occurred on the 12th lap, triggered when Sebastian Saavedra (Conquest Racing) car hit James Hinchcliffe (Newman/Haas) on the run into Turn 1.

Saavedra lost control in Turn 2 which caused further collisions, with Will Power’s Penske car becoming airborne after being left with nowhere to go.

Many of the cars caught fire during the accident, including Jay Howard’s Rahal entry and Power’s championship contending car.

Power has emerged from the incident with lower back pain.

The most concern now centres on the condition of Dan Wheldon, whose car suffered massive damage. When the rescue crews reached his car, they covered it up before airlifting him to hospital.

Wheldon and Power are due to compete in this weekend’s Armor All Gold Coast 600 – Wheldon with James Courtney in the #1 Toll Holden Racing Team Commodore VE, while Power is set to drive alongside Mark Winterbottom in the #5 Orrcon Steel FPR Falcon.

See below for a replay of the accident.