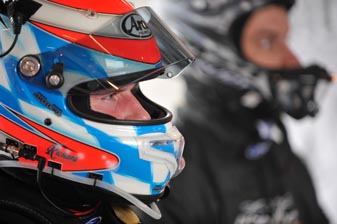 The Irishman, who drove with Jonathon Webb at the L&H 500 Phillip Island and the Supercheap Auto Bathurst 1000, has been secured by FPR to replace Power who was injured in IndyCar’s season finale at Las Vegas.

Power was involved in the same accident as Dan Wheldon, who was killed in the crash that has shocked the motorsports world.

The international driver criteria for the Armor All Gold Coast 600 was that the selected drivers could not compete in either of the V8 Supercars endurance races at Phillip Island or Bathurst. Due to the unforeseen tragedy at Las Vegas, V8 Supercars has allowed Lyons an entry into the factory Ford team.

Alongside Webb, Lyons finished 18th at Phillip Island and 13th at Bathurst.

Lyons’ other V8 Supercars experience is with TeamVodafone in the 2007 endurance races, finishing fifth at Mount Panorama.

“On behalf of everyone at Ford Performance Racing I would like to pass on our heartfelt condolences to the family and friends of Dan Wheldon,” Edwards said.

“It was a terrible accident and our thoughts are with them.

“Our thoughts are also with Will Power at this tough time and we are just thankful he has escaped without any serious injury.

“I’d also like to thank Richard Lyons for stepping in at such short notice in place of Will. I have known him since my Formula 1 days and he has always impressed me so I am sure he will adapt quickly to our car and the Surfers Paradise track.”

Lyons will shortly be on a plane to Australia and was glad he could assist the team at such short notice.

“I am really torn about racing as I literally heard the sad news about Dan’s passing only an hour before I spoke with Tim,” Lyons said.

“I’ve known Dan for about 15 years as we started off racing together as juniors. We lived nearby in England and we hung out whenever we could so it is with a heavy heart I come to Surfers Paradise.

“While I am sorry that Will can’t come I look forward to working with such a seasoned professional as Mark Winterbottom and it is a great opportunity for me to work with FPR.

“I’ve known Tim for many years and I’ve wanted to drive for him since he worked for Jordan back when he was in Formula 1. So I am grateful that he has called me and I am looking forward to the challenge of another new car and circuit.”