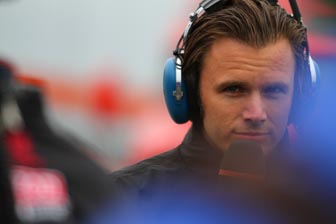 Dan Wheldon has died due to injuries sustained in a horrific accident at Las Vegas today.

IndyCar Series officials confirmed his passing after he was airlifted from the track’s medical facility to the University Medical Centre in Las Vegas.

The Brit, driving for Sam Schmidt Motorsports, was one of 15 cars involved in a Lap 12 crash in the season finale.

The race meeting has been called off. Dario Franchitti will become this year’s champion.

“IndyCar is sad to announce that Dan Wheldon passed away from unsurvivable injuries,” the statement read.

“Our thoughts and prayers are with Dan and his family. IndyCar, its drivers and teams have decided to end the race. We will run a five-lap salute in honor of Dan.”

Wheldon is survived by his wife Susie and their two sons Sebastian and Oliver.

Wheldon was due to compete with James Courtney in the #1 Toll Holden Racing Team Commodore VE at the Armor All Gold Coast 600 this weekend.

CLICK HERE for a timeline of Wheldon’s motor racing career.