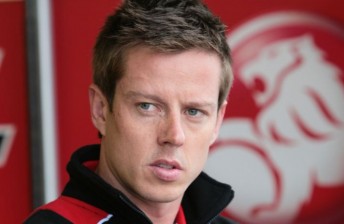 James Courtney has described the death of Dan Wheldon in an IndyCar race this morning as a ‘reality check’ for all racing car drivers.

Wheldon was set to team with Courtney in this weekend’s Armor All Gold Coast 600, before the two-time Indianapolis 500 winner succumbed to injuries sustained in a 15-car accident at Las Vegas Motor Speedway.

Courtney first met Wheldon while racing karts in Europe in the mid-1990s, and says he had considered the Briton as a friend ever since.

“It is probably a bit of a reality check,” said Courtney of the situation.

“Everyone becomes immune to the danger side of things and it unfortunately takes something like this to really bring it back to ground.”

While a replacement co-driver is yet to be confirmed, Courtney said he has not considered pulling out of the event, citing the inherent differences in the dangers involved in racing V8 Supercars compared to IndyCars.

“Our cars are incredibly safe, we are not doing the crazy speeds that they (IndyCar) are doing and also we are enclosed in an awesome car that has been proven many, many times to be very, very safe,” said Courtney.

“I have never questioned my safety in V8 Supercars and to be honest the first thing I want to do now is to go racing, to get out there and to do it.

“I am sure Dan would want everyone to go out there and have a great time.”

Describing Wheldon as “a happy go lucky guy,” Courtney feels this weekend’s Gold Coast race should be about celebrating the Briton’s life.

“He’s the type of guys who wouldn’t want people upset or moping around, he’d want everyone to go out there and get on with it,” said Courtney.

“It is going to be tough at times for the IndyCar guys, the ones that do come. In the end, I think it’s more important to celebrate a life, rather than the loss.”

CLICK HERE for more tributes from the global motorsport community

CLICK HERE for a timeline of Wheldon’s remarkable racing career