Stoner: I nearly threw it all away

Stoner: I nearly threw it all away 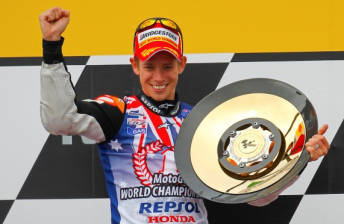 Casey Stoner has admitted that he came close to falling off his Honda at the end of today’s Iveco Australian MotoGP.

Stoner wrapped up his second world title today at the Victorian circuit, but a late rain spell sent many riders off the track.

In the opening laps, light spits of rain hit the track, but with four laps to go, a sudden and heavy shower drenched the circuit.

After he wrapped up his fifth-consecutive Phillip Island win, the Australian Honda rider said that he was almost a casualty in the tricky conditions.

“I nearly came off the track … I was pretty lucky to stay on at that point because I think I was the first person to hit that wall of rain,” Stoner told the media in the post-race press conference.

“We had that first cloud pass over us with a few spits and we were able to keep our advantage there but when it hit the second time, it didn’t look that dark.

“But the rain falls at you a lot heavier and worse and I’ve gone into that last turn and as soon as I’ve cracked that throttle again, the rear came around and my heart was up in my throat.

“I took it very gingerly the last lap just to bring it home.

“Phillip Island doesn’t let you go home without a wet session and we got it during the race unfortunately.

Celebrating his 26th birthday today, Stoner said that it may take some time for this day to soak in.

“Not too many people have the opportunity to have all these sort of things align – your home grand prix, your birthday, this many straight wins here and then a world championship,” he said.

“There’s that many things in one day it’s hard to take hold of it all.”