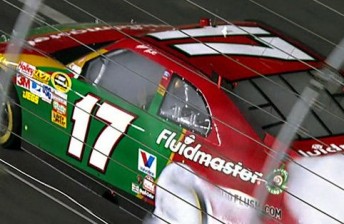 Matt Kenseth has staked his claim for the 2011 NASCAR Sprint Cup by taking his third win of the season in the Bank of America 500 at Charlotte.

The Roush Ford driver made the winning move on long-time leader Kyle Busch with 25 laps to go, and survived a final restart to take the victory.

Busch gained the upper-hand in a hard scrap for second with points leader Carl Edwards over the closing laps, while Kasey Kahne and Marcos Ambrose rounded out the top five.

Five-time defending champion Jimmie Johnson brought out the last full-course yellow of the race with just 17 laps remaining when he lost control of his Hendrick Chevrolet while battling with Ryan Newman and Kasey Kahne for seventh place.

Johnson over-corrected a slide before making heavy contact with the Turn 2 exit wall, and was lucky to emerge from the incident unharmed.

Ambrose appeared in trouble on the resulting restart, dropping from third to eighth after contact with Denny Hamlin, before recovering to trail home Kahne.

The Red Bull Toyota driver had been one of several to spin out in Turn 1 when the green flag flew with 42 laps remaining.