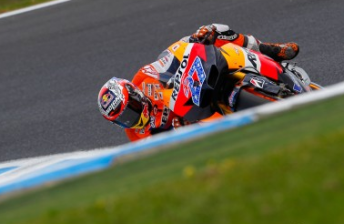 The Honda rider, celebrating his 26th birthday today, survived a late heavy shower to take the win, giving him enough points to wrap up another title, adding to his success in 2007.

Stoner’s run to the title became easier this morning when his closest rival Jorge Lorenzo (Yamaha) lost the ring finger of his left hand in a warm-up crash. CLICK HERE for more on Lorenzo’s incident.

Stoner had the ideal race, leading off the start line and heading the field in every lap of the race.

It means that in five years at Phillip Island, Stoner has led every lap bar one.

The late rain saw a number of riders come unstuck, including Suzuki’s Alvaro Bautista who was running comfortably in sixth place until he slipped off the road at Turn 12.

The final round of the world title heads to Malaysia next weekend.

See below for results of the Phillip Island MotoGP.