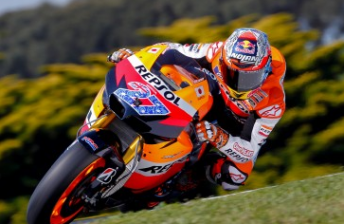 It is Stoner’s 11th pole from 16 rounds this year.

Stoner languished as low as fourth in the first half of the session, but as he has done so many times before, unleashed his raw speed, reeling off the three fastest times of the sessions, scoring the top spot.

Behind Lorenzo and Simoncelli was Alvaro Bautista (Suzuki), scoring his career-best qualifying result.

Andrea Dovizioso (Honda) and Nicky Hayden (Ducati) took fifth and sixth ahead of Ben Spies (Yamaha), who crashed heavily at Turn 3 early in the session, but rejoined later to take seventh place.

Karel Abraham crashed his Cardion AB Ducati at Siberia in the closing stages of the session while Australian rider Damian Cudlin (Aspar Ducati) completed only one slow lap. After his heavy crash in the morning’s practice session, Cudlin is uncertain to start tomorrow’s race.

See below for the complete grid for tomorrow’s Iveco Australian Grand Prix.