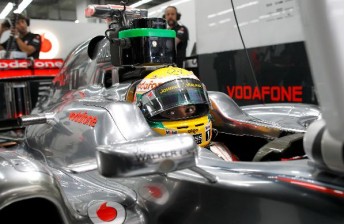 Lewis Hamilton in his McLaren

Lewis Hamilton has broken Red Bull Racing’s stranglehold on qualifying in 2011, taking pole for the Korean Grand Prix in his McLaren.

The 2008 World Champion was the fastest man across both runs in Q3, while Sebastian Vettel’s second effort ensured that a Red Bull will be represented on the front-row.

Jenson Button will start one place ahead of Mark Webber in third after the Australian abandoned his final run after a scrappy first sector.

Michael Schumacher will start 12th after complaining of a vibration during Q2, while Daniel Ricciardo failed to complete a lap in Q1 due to mechanical issues with his Hispania.

See below for Speedcafe.com’s Formula One Race Guide