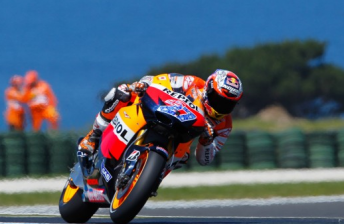 Australian Casey Stoner has kept the MotoGP rest of the field at bay in the second free practice session at Phillip Island today.

The Honda rider led the session from start to finish, backing up from topping the first practice session at the Victorian track.

Stoner, riding the #27 Repsol Honda, finished 0.3s clear of Jorge Lorenzo (Yamaha) in the combined times from the two sessions.

Behind Stoner in Practice 2 was Gresini Honda rider Marco Simoncelli, who despite an early fall set the second fastest time.

Simoncelli, third overall for the day, improved his pace by 0.04s to slot himself ahead of Lorenzo in the afternoon despite a repeat of the morning’s misfortune of an early crash. The Italian was followed by Colin Edwards (Monster Yamaha Tech 3) and Ben Spies (Yamaha).

Sixth for the day was Andrea Dovizioso (Repsol Honda) thanks to his time he set in the morning, while team-mate Dani Pedrosa ranked seventh with a lap of 1m31.543 set in the afternoon.

Hiroshi Aoyama (San Carlo Honda Gresini) ranked eighth for the day, with Nicky Hayden (Ducati Team) following the Japanese rider by 0.080s with his time set in the morning to finish ninth.

Randy de Puniet (Pramac Racing) took the 10th spot ahead of Álvaro Bautista (Rizla Suzuki), while Valentino Rossi (Ducati Team) lingered in 13th, a second and a half behind leading man Stoner.

Home rider Damien Cudlin, who is replacing an injured Héctor Barberá for the Mapfre Aspar team, lapped the 4.45km track one second behind Toni Elías on the LCR Honda in 16th.