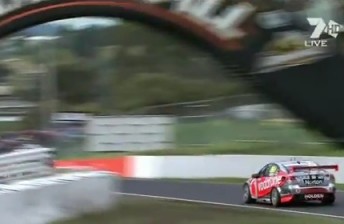 The controversial wall at the exit of The Chase (PIC: Courtesy Seven Network)

Seton, now driving in the Touring Car Masters Series, says that the angle of the wall on the exit of The Chase needs to be addressed after it claimed a number of support race victims last weekend.

Due to the location of the famous Armor All bridge, the wall sits at a 45 degree angle to the race track, making it susceptible to nasty incidents – most notable for Paul Radisich’s crash in the 2006 Bathurst 1000 when he hit the wall head-on, breaking his pelvis and ankle.

It is considered that the only way to improve safety at the corner is to re-profile the size and shape of the Armor All bridge. Seton, who won the final Touring Car Masters race at Bathurst last weekend, says that the issue needs to be addressed before more a driver is seriously injured.

“There’s no doubt that it needs to be looked at,” Seton told Speedcafe.com.

“We’ve had quite a few incidents now, with quite a few injuries. Paul Radisich is a good example there, plus the couple of accidents that we saw over the weekend.

“It’s the alignment of the wall that creates the situation. If the wall ran alongside of the track, you’d only bounce off it and run down the road.

“Anytime you have an incident, in any part of any race track, you’ve got to access what you can do to make the circuit safer.

“It’s the angle that you hit that wall. Just before the bridge is the situation you have to look at.”

See below for video of the Touring Car Masters incident at Bathurst.