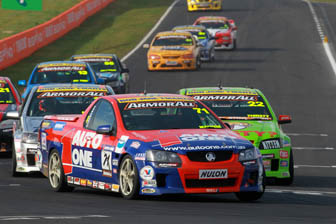 David Besnard will make his V8 Utes debut at the Armor All Gold Coast 600 next weekend.

The Dick Johnson Racing endurance driver, who was involved in the horrifying fireball incident at last weekend’s Bathurst 1000, will steer the Auto One Wildcard entry for Round 6 of the Auto One V8 Ute Racing Series at the famous Surfers Paradise street circuit.

The Gold Coast resident has recovered from the accident to back up for his V8 Utes debut.

“My back is a bit stiff, nothing too major though, I’m feeling pretty good and looking forward to racing a ute,” he said.

“I’m there to have fun and enjoy it but I’m also very competitive and would love to be up the pointy end.

“We don’t have any testing so I’ll start fresh when I hit the track. I have a work Ute but I’ve never raced one. It’s all new but a bit of fun.”

Besnard has a lot of experience racing on the Surfers Paradise street track, having competed in many V8 Supercars events, plus his one-off drive in a Champ Car. Besnard’s last time on the Gold Coast track was in 2009 in an Aussie Racing Car, however isn’t too worried about the change in the track.

“I haven’t raced for a few years on the Gold Coast, and have no experience on the short track. It’s all the same though, just shorter,” he said.

Besnard will have his first practice in a V8 Ute on Friday, 22nd October before heading out for qualifying later that day.

Other support categories at the Armor All Gold Coast 600 include the Australian Formula Ford Championship, Porsche Carrera Cup and the Touring Car Masters.