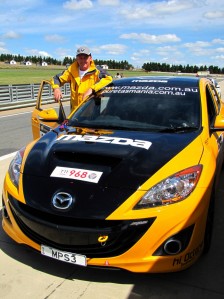 Simon Evans will drive for Mazda at Targa High Country

Mazda has confirmed that the most powerful couple in Australian motorsport will pilot its Targa Tasmania-winning Mazda3 MPS at next month’s Targa High Country rally held around Victoria’s rugged alpine region.

Four-time Australian Rally Champions Simon and Sue Evans, widely known for their blistering speed on gravel, will take to the tarmac for Mazda in its 190kW turbocharged hot-hatch for the second running of the event held around Mt Buller from November 4 to 6.

The couple, currently on a one-year sabbatical from the Australian Rally Championship (ARC), is delighted to have the opportunity to drive for Mazda.

“We’ve watched Mazda’s motorsport achievements with interest over the past few years and have been impressed with their success in the Targa events,” said Evans.

“I’m very excited to have the opportunity to get behind the wheel of the Mazda3 MPS.”

Between them Simon and Sue also have a number of successful tarmac outings to their name including the Nurburgring 24 Hour, Rally Tasmania and Targa Tasmania.

While driving an unfamiliar car on unfamiliar roads would be enough to render most tentative, Evans – whose strategy for any event is to take one corner at a time and drive simply ‘to win’ – already has his eyes cast on the rally’s showroom prize.

This is a welcomed determination from Mazda’s latest factory driver, with the company’s outing at last year’s inaugural Targa High Country ending in bitter disappointment. Mazda’s regular Mazda3 MPS driver Brendan Reeves dominated the showroom category until the final stages of the event when he crashed out while trying to avoid a collision with another competitor.

Despite the disappointment it didn’t take long for Mazda Motorsport’s well-oiled race team to get the Mazda3 MPS back on song with Reeves more recently winning the showroom competition, and finishing an incredible fourth outright, at April’s Targa Tasmania rally.

While Reeves would have fancied the opportunity to finish what he started last year, Reeves and co-driving sister Rhianon Smyth will be competing in the final round of the WRC Academy at Rally GB.

“It was a disappointing Targa High Country for us last year but we’re heading into this year’s event still on a high from an outstanding result at Targa Tasmania,” said Mazda Motorsport Manager Allan Horsley.

“We know the car is in great shape, now we just wait and see what this year’s event throws at us.”

“We’re very honoured to have Simon and Sue join us for this event. Simon possesses a talent that few drivers in Australia can rival and the two of them together make for an extremely competitive team.”

This year’s Targa High Country comprises 16 challenging closed-road stages and 217 competitive kilometres over two days taking in Mt Buller, King Valley and Eildon. The event will kick off with a prologue held in the picturesque town of Mansfield on Friday 4 November.

Targa High Country is the opening round of the Australian Targa Championship, which also made up of Tasmania’s Targa Wrest Point and Targa Tasmania rallies.