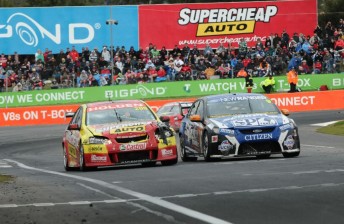 A total of eight drivers have had their V8 Supercars Championship points tallies adjusted following the final stewards report from the Supercheap Auto Bathurst 1000.

Shane van Gisbergen is the highest placed championship contender to be affected, with the 23-year-old and his SP Tools Racing co-driver Johnny McIntyre losing 25 points each for contact between van Gisbergen and Paul Dumbrell that turned the Bottle-O Falcon into the fence at Forrest Elbow late in the race.

Rick Kelly, who was fourth in the championship prior to Bathurst, and his co-driver Owen Kelly have also been penalised 25 points each for contact between the Jack Daniel’s Racing Holden and the Lucky 7 Racing Falcon that saw the Tim Slade/Daniel Gaunt entry off the road in The Chase on Lap 56.

Michael Caruso and Marcus Marshall (Fujitsu Racing) have also lost 50 points each having been found guilty of careless driving on both the van Gisbergen/McIntyre and Steve Owen/Paul Morris cars during the race.

Russell Ingall and Jack Perkins meanwhile were handed 25 point penalties for exceeding the maximum distance before merging into the fast lane following a pitstop, while the stewards also found that no rules were breached in an incident involving Car #3 Tony D’Alberto/Dale Wood and Car #4 Alex Davison/David Brabham.

The IRWIN Racing Falcon was handed a pitlane drive-through-penalty during the race however following Brabham’s assault on Perkins at The Chase.