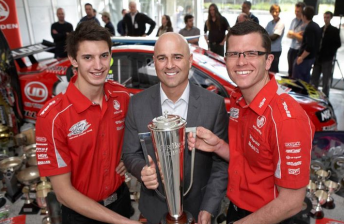 It was double celebration for The General, with the Toll HRT celebrating its 200th race wins in Australian Touring Car/V8 Supercars competition.

Tander and Percat’s triumph was Toll HRT’s seventh victory in Australia’s Great Race and came almost 21 years to the day of when it won its first race – the 1990 Bathurst 1000 with drivers Win Percy and Allan Grice in a VL Commodore.

In front of a packed house of employees, and surrounded by many of the team’s 200 winning trophies, Devereux paid tribute to Holden’s factory team.

“We are incredibly proud of the Toll Holden Racing Team and its extraordinary achievements over the past 21 years,” Mr Devereux said.

“HRT is part of the Holden DNA. It has become synonymous with success and Sunday’s Bathurst triumph – its 200th all-time race win and seventh Bathurst victory – was yet another milestone in its rich and storied history.

“Everyone at Holden congratulates Garth, Nick, [team owners] Martine and Ryan Walkinshaw, and everyone who has contributed to HRT’s amazing success.”

Three-time Bathurst winner Tander said he enjoyed bringing the Peter Brock Trophy back to Holden headquarters for the second time in three years.

“It’s always great to come back to Holden to bring home good news. The passion the Holden employees have for the factory Holden Racing Team is fantastic, so to be able to bring the Peter Brock Trophy home again is extremely satisfying,” Tander said.

For Bathurst rookie – and now winner – Nick Percat, the visit to Holden headquarters was almost as exciting as winning Sunday’s Great Race.

“My dad, grandfather and great grandfather all worked at Holden in Adelaide, so coming to head office was like coming home,” Percat said.

“I couldn’t believe how many people were here, it was a little overwhelming actually, but it’s great to see that everyone at Holden wanting to be a part of the Toll Holden Racing Team and our Bathurst win.”

Tander and Percat will head to South Australia tomorrow to tour the Holden Vehicle Operations at Elizabeth.

See below video from Holden Motorsport.