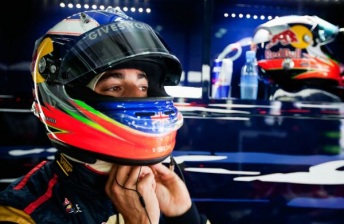 Vettel, one of the first Red Bull junior drivers, wrapped up his second-consecutive world title at last weekend’s Japanese Grand Prix at Suzuka.

Ricciardo is one of Red Bull’s emerging young stars and has been one of its junior drivers since 2008.

After a number of years in lower formula, Red Bull has assisted in Ricciardo’s promotion to F1 this year, driving for back marker team HRT F1.

The West Australian native says that watching Vettel achieve the ultimate in world motorsport has given him confidence that he can have a chance to achieve similar heights.

“He’s come through the same ranks as I have, so he’s proved that it is possible,” he said.

“He has proved to us Red Bull drivers that we can do it. That’s good to have something to follow and something to aim for.

“He has definitely set the standards high for us, but we’re human as well. I believe in my ability and hopefully that ability is to do what he has done and win a world championship.

“I have my sights set on that and I’ll try and learn from him.”

Ricciardo, Vettel and the rest of the F1 field will be back in action this weekend for the second Korean Grand Prix.