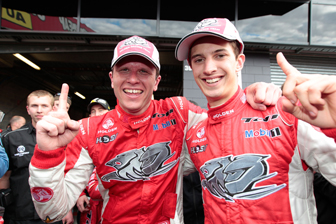 Nick Percat is a Bathurst 1000 winner. For a bloke who only won the Australian Formula Ford Championship in 2009, this result is a dream come true.

With a few days past to reflect on his achievements, Speedcafe.com’s Grant Rowley spoke to Percat about his week in the limelight and his future plans in V8 Supercars.

SPEEDCAFE: Congratulations, you’re a Bathurst 1000 winner. What’s the last few days of your life been like?

NICK PERCAT: Pretty flat out! Definietly been busy with the media and all of that.

It’s funny how many more friends you get. I’ve been watching my Facebook friend requests come through by the minute! 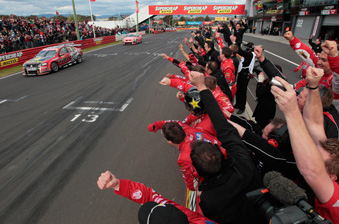 SPEEDCAFE: And how’s your Twitter going? How many new followers?

PERCAT: I think that number went up by about 500. Not too bad.

SPEEDCAFE: Talk us through your last few days, since the #2 Toll HRT Commodore crossed the Bathurst finish line in first place …

PERCAT: Since we won, my life became 100 times busier. I was meant to be going to Eastern Creek to do some driver training. I had to can that. From 6am Monday morning, the phone hasn’t stopped ringing with radio interviews, we did a Sunrise cross at 7am.

SPEEDCAFE: What has been the best part of being a Bathurst winner?

PERCAT: Probably standing up on that podium. I knew it was going to be massive, but I can’t describe how good it is up there. It was unbelieveable. the response that we’ve got from fans, that’s probably the best bit too.

You just can’t comapre this to anything. I was pretty happy the day I won the Formula Ford Championship, but this tops it – it’s 100 times better. The feeling is unbeliveable.

SPEEDCAFE: That feeling sounds good, but you didn’t look so comfortable sitting in pit lane, watching Craig Lowndes mow down Garth’s lead. Thinking back, what was it like watching your lead dwindle away.

PERCAT: That was kind of a stressful time. I don’t know how the engineers stand there all the time and watch the races.

I guess, because it’s out of your control and you’re watching someone else coming, ready to attack, and we were already on the defensive because we’d used the tyre already. It was stressful. I had to pace up and down.

By the time he came out of the Chase, I decided ‘it is what it is.’ I ran to the pit wall, and was thinking ‘first will be amazing, but second is still amazing.’ When I saw him come around the final corner first, I couldn’t believe it. There ere some interesting words said at the time – it was out of control.

SPEEDCAFE: You’d raced in the Formula Ford Championship for a few seasons with backing from Walkinshaw Racing. Given what you’ve achieved now and the position that you’re in, how much to you owe to the Walkinshaw team?

PERCAT: All of it. Without Walkinshaw Racing’s support, I would have found myself back in go-karts. We pretty much had no money left before Walkinshaw pulled me through the whole way. It’s a credit to them for having the faith in me.

It was their grand plan all those years ago and it has paid off. Now we’ve got to keep it going and get into the Main Game with them, hopefully, and work on winning a championship and more Bathursts.

SPEEDCAFE: What are your plans for the future?

PERCAT: I’m not 100 percent sure yet. I’d like to do the Main Series next year. After Phillip Island, I realised I was quick enough to go up against these guys. Doing a few stints against Lowndes and Skaife, I know I can do it.

If the right opportunity came along, you’d have to have a very serious think about it. It’s early days still. We’ll just get through this week and see what happens after the Gold Coast. All the teams are obviously flat out at the moment, so this is a good time for me to digest what has happened and press on after that.

SPEEDCAFE: Do you think you’ll be racing Main Series next year?

PERCAT: I could be, if the right deal came along. It’s a tough decision, because I don’t want to leave where I am at the moment, so we’ll see how it pans out.