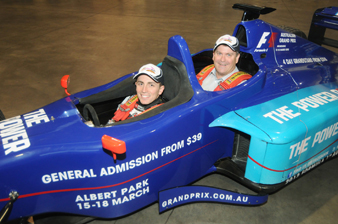 A two-seat Formula One ride car will cut laps of the Surfers Paradise street track as part of the Armor All Gold Coast 600, October 21-23.

It will be the first time that a F1 car has driven around the 2.9km Gold Coast track.

The international-flavoured V8 event will see 28 of the world’s best drivers join each regular V8 entry. One of the most anticipated stars of the race is current HRT F1 driver Vitantonio Liuzzi.

The Italian will Tony D’Alberto of Wilson Security Racing, who recently got to sit in the F1x2 with Queensland Sport Minister, Phil Reeves.

D’Alberto, who finished ninth in the Bathurst 1000 last week, is looking forward to having Liuzzi as his partner in the Gold Coast race.

“As with anyone in motorsport, I love F1 and driving with Liuzzi is going to be fantastic,” said D’Alberto.

“Everyone wants to drive an F1 car – sitting in it was so tempting. I just wanted to start it up and take it for a spin. I’m jealous of those who will get the chance to ride in it on the Gold Coast.”

The car – commissioned and owned by Australian entrepreneur Stoddart, is being transported to the Gold Coast as a joint initiative between V8 Supercars and the Australian Grand Prix Corporation.

Car driver McConville, who will also compete in the V8 Utes support category at the event, says that he is thrilled to become the first person to drive an F1 car around the street track.

“Formula 1 engines have such a unique sound and any time you get to hear one in full flight it is an awesome experience,” said McConville.

“I’ll go one better and be actually driving it around the Gold Coast. I think it’s probably a world first – there wouldn’t be too many people that have driven a Ute and an F1 car in the same weekend!

“I’ve driven a Honda Formula 1 car before and this two-seater, but never on a circuit like this.

“I’ll be giving my passengers the ultimate F1 experience – but ensuring that they are kept safe at the same time – I want to bring the car home in one piece.”