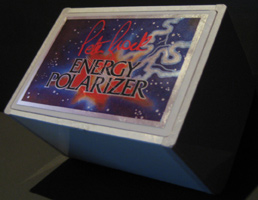 The controversial Energy Polarizer from the late 80s

HDT will launch its next creation in exotic Australian road going vehicles next Wednesday – and it will include a polariser.

With four Heritage Retro Series cars already released over the past three years, HDT will take the wraps off the fifth and final edition to the collection – the much anticipated VL/VE Retro Plus Pack Commodore.

To stay true to the styling cues from the original Peter Brock-built vehicles, and in the true spirit of the VL Plus Pack, HDT will include the controversial energy polarizer in the car.

The VL/VE will join the VC/VE Retro from 2008, which was closely followed by the VH/VE Retro. Bathurst 2009 saw the company unveil of the hugely popular VK/VE ‘Blue Meanie’ Retro and in 2010, HDT released our 30th anniversary VC limited release vehicle.

The official press launch will be hosted by Peter Champion and his team where all guests will get to view the latest release up close and may also be able to experience a few laps ‘on track’.

The Eastern Creek launch will also feature some great cars from the past of the HDT VL line up including the infamous HDT VL Director that Brock launched, leading to GM severing their ties with him the next day.

Special guests on the day will include Bev and Robert Brock.