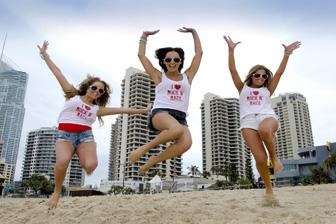 The winners of the 5 grand will have to go to a little more effort than these GC girls ...

Race fans at next weekend’s Armor All Gold Coast 600 will have the chance to win $5000 on Saturday and Sunday as part of V8 Supercars’ ‘Embrace the Race’ promotion.

The best-dressed fan on Saturday and Sunday at the famous Surfers Paradise street track will win $5000.

It doesn’t matter whether fans are supporting one of the 12 nations represented by the international co-drivers, their favourite driver or even dressing up just for the sake of it – it’s all about cementing the Armor All Gold Coast 600 as South-East Queensland’s biggest party.

Organisers are encouraging fans to get out the face paint, don the lederhosen, get into the fluoro, national flags or anything else that screams “we’re here for a good time!”

“The Armor All Gold Coast 600 is all about having fun, getting together with your mates and really immersing yourself in the race by day, rock by night action that V8 Supercars is presenting,” V8 Supercars Acting CEO Shane Howard said.

“The Surfers Paradise Street Circuit is one of the most awesome in the world – nowhere else can you go with a beach two metres one side of you and the race track two metres the other side and the party we always see reflects that.

“One of the greatest moments of this event was when Nigel Mansell competed here in his first IndyCar race as the reigning Formula 1 World Champion. Surfers Paradise was a sea of Union Jacks and all his British fans came with their faces painted.

“We want to see scenes like that and even more. There are plenty of passionate fans that come to this event and the Gold Coast is after all, Famous for Fun – we can’t wait to see what outfit the fans can come up with.”

Flags of the competing nations, face painters, Brazilian Samba bands and a whole lot more roving entertainment will feature at the Armor All Gold Coast 600.

To enter the $5000 to win Embrace the Race competition, fans have to visit the Sea FM Stage on either Saturday or Sunday and register their details.

The entry judged to have best got into the party swing will be called during the afternoon to return to the Sea FM Stage and collect their $5000 winner’s novelty cheque and their photo will be displayed on the bigscreens around the venue.

The Armor All Gold Coast 600 combines Australasia’s 28 V8 Supercars heroes – fresh from the Supercheap Auto Bathurst 1000 – with 28 international co-drivers from all walks of motorsport life – Formula 1, IndyCar, Le Mans 24 Hour and World Touring Car champions will be thrown together on the 2.96km Surfers Paradise circuit.

Once the racing is complete, two nightly 600 Sounds concerts will keep fans rocking into the night. Friday night will see Bliss N Eso joined by fellow hip-hop and dance acts – Drapht, Illy, Tonite Only, The Potbelleez and Bag Raiders.

The Armor All Gold Coast 600 party kicks off on Friday, October 21 and carries right through to Sunday, October 23.