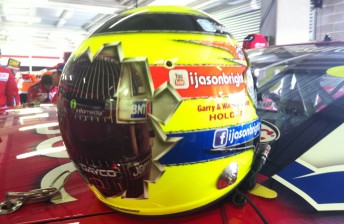 The back of Bright's new helmet, featuring 'JR's' helmet

Richards, now 12 months into his fight against an aggressive cancer, rode with Bright on the back his helmet where the #8 Team BOC Commodore finish in fifth place in the Supercheap Auto Bathurst 1000.

“JR was meant to be driving the car with me and I wanted to show him that I wanted him in the car too, and that he is part of the team no matter what,” Bright said.

“The helmet design is how you get your message across in the car and I thought it would be a great to take Jase for the ride with us.”

Bright will keep the helmet scheme for the remaining rounds of the 2011 season.

But Speedcafe.com does not expect the visor sticker to last too long …

Before Bright wore his new helmet in the car, the Brad Jones Racing team presented the helmet to him with a ‘Geelong Cats 2011 Champions’ visor sticker.

Of course, Bright is a life-long Collingwood supporter – the team that lost to Geelong in the AFL Grand Final at the start of this month.

See the video of his helmet presentation below, and Bright’s disgust in seeing the visor sticker!