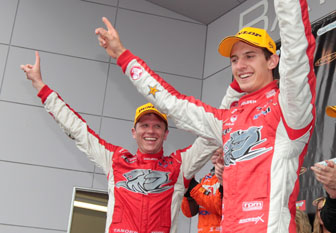 The Australian Red Bull Formula One star tweeted today a praise for Tander, complimenting him on his achievement.

Of course, Webber would not have been able to see any of this year’s ‘Great Race’ as it directly clashed with the Japanese F1 Grand Prix. Webber finished the race at Suzuka in fourth place while his team-mate Sebastian Vettel took third, wrapping up his second-consecutive world title.

CLICK HERE for Speedcafe.com’s report on the Japanese Grand Prix.

Tander responded to Webber’s tweet, wishing him the best for this weekend’s F1 race in Korea.

“A little too close for comfort though! Have a good run this weekend. Smash ’em.”

Webber returns to the track this weekend for the Korean Grand Prix.

Compared to Webber, Tander has an extra week up his sleeve. He will next be on track for the Armor All Gold Coast 600 (October 21-23).