New chairman for SA motorsport board

New chairman for SA motorsport board 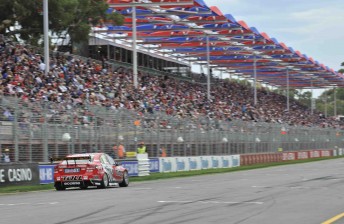 Garth Tander at the Clipsal 500

The South Australian Motor Sport Board has confirmed its new chairman.

The Minister for Motor Sport Kevin Foley announced that Andrew Ford would take the position as chairman, replacing founding chairman Roger Cook AM, whoannounced his intent to step down at the 2011 Clipsal 500 Adelaide after 13 years in the position.

The South Australian Motor Sport Board is responsible for the management of Adelaide’s award-winning Clipsal 500 Adelaide V8 Supercars event and the internationally-acclaimed World Solar Challenge, held every two years from Darwin to Adelaide.

“Mr Ford has been a Director of the SAMSB since September 2001 and his commitment to the activities of the Board, together with his outstanding professional and business skills, make him very well qualified for the position of Chairman,” Minister Foley said.

“The Clipsal 500 Adelaide is South Australia’s largest annual ticketed sporting event. In its 13-year history it has contributed a total economic benefit of almost $320 million and has been recognised as the best touring car festival in the world by motor sport icon Murray Walker.

“I am extremely confident that its success will continue under the Chairmanship of Andy Ford.”

Ford is a director of Woods Bagot, the global design studio established in Adelaide with offices throughout Australia, Asia, Europe, the Middle East and North America.

Ford has also had a long history in motor sport. He current competes in club motor racing events.

“He has been extremely active as a SAMSB director with a particular emphasis on circuit facilities, design of the temporary structures required for the Clipsal 500 Adelaide, engineering, and the programming of motor sport activities,” Foley said.