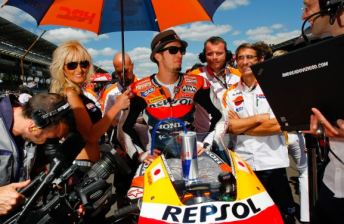 Andrea Dovizioso has confirmed that he will ride for Tech 3 Yamaha next year alongside Cal Crutchlow.

Dovizioso will replace MotoGP veteran Colin Edwards, who announced last month that he will ride for current Moto2 team Forward Racing. The team is making the step to the MotoGP next year, with Edwards set to be its lead rider.

Dovizioso, 25, has spent the past three years with the factory Honda squad, but has been forced out as it reduces to a two-bike line-up for Casey Stoner and Dani Pedrosa.

In his time with Honda’s MotoGP squad, he has taken 13 podium finishes, including his one victory in 2009 at the British Grand Prix.

The Italian is pleased to have secured his future in the sport.

“I’m happy to have reached this agreement with Tech 3 for next year and I want to thank [team boss] Herve Poncharal for the opportunity he is giving me,” Dovizioso said.

“I am excited to become part of Herve’s squad and to be teamed with Cal. I am sure this new challenge will be exciting, motivating and fun. Now that 2012 is sorted I want to focus on finishing the season in the best possible way.”

Team boss Poncharal said the skill and statue of his new rider Dovizioso is a major boost for the team.

“I am delighted that a rider of Andrea’s stature has decided to commit his future to Tech 3 and Yamaha,” he said.

“He is without doubt one of the fastest riders in the world who has proven on a regular basis that he is capable of challenging for the podium in MotoGP.

“I am thrilled that he trusts the Tech 3 Team to take his career to the next level and we can look forward to 2012 with high expectations. I am convinced that with Andrea and Cal we have one of the strongest line-ups on the grid in 2012 and both of them will demonstrate the potential of Yamaha’s new 1000cc machine.”

The MotoGP class heads to Phillip Island this weekend for the Australian Motocycle Grand Prix.