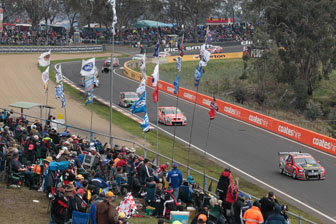 The field race across the top of the mountain

The international coverage of the Supercheap Auto Bathurst 1000 has received worldwide recognition.

During the course of the telecast, NASCAR star Jeff Gordon praised the Bathurst circuit as a “cool track” to his 95,000 followers. In response to a fan asking if he’d like to come down under to race the 1000, he tweeted ‘(would) love to! I’ve really enjoyed Australia the times I’ve been down there. Driving on the right side and shifting with left hand would be tough.’

Similarly, former Gold Coast Champ Car winner, Ryan Hunter-Reay tweeted that he was ‘salivating over this (Mount Panorama) track – would love a chance to race in this series.’

Filipino driver, Enzo Pastor who recently tested the second placed Craig Lowndes/Mark Skaife TeamVodafone Commdore was one of many thousands across Asia watching live and was awe of the race.

“It was amazing to watch the finish of that race, I couldn’t believe I was seeing the car I drove just over a week ago fighting to one of the closest finishes in Bathurst history,” said Pastor.

“To think that the team took time out of their schedule to get me behind the wheel so close to a race that big was very humbling.

The international coverage of the Championship will continue with the Armor All Gold Coast 600 – which will once again be beamed live into the USA. With the rave reviews of the Supercheap Auto Bathurst 1000 coverage coming from the USA, an even stronger audience should be tuning into the Gold Coast race, especially with many household names joining the Aussie V8 stars.

CLICK HERE for Speedcafe.com’s weekly column, focussing on the Bathurst 1000.

Watch the start of the Supercheap Auto Bathurst 1000 as seen by American viewers on SPEED TV: