The Vodka 0 Australian GT Championship is eyeing a return to the Shannons Nationals presented by Hi-Tec Oils next season.

This year’s GT Championship has seen five rounds run as a support category to the V8 Supercars Championship, with a further two rounds contested as stand-alone events.

The calendar shake-up, which will see stand-alone meetings abandoned in favour of running with the Nationals, comes after a review of the championship’s operations following a mid-season takeover by competitor Tony Quinn and category management company Spherix.

According to Spherix co-owner Craig Denyer, a desire for one-hour races and a strong television package means the Shannons series is a good fit.

“Preferably we’d like to run where the existing television infrastructure is in place,” said Denyer of the 2012 calendar.

“When you do run a stand-alone there is a lot of money that has to be spent to bring that in. It’s simply not a viable option for us.

“The Shannons series has gathered some reasonable momentum over the last few years, it offers relatively good television package and exposure which is already in place, and the range of categories is quite strong. It makes sense.

“If we pick two or three of the cream marquee events, like Clipsal (Adelaide’s Clipsal 500), and maybe two of the other V8 Supercar rounds, and supplement that with another three or four Shannons rounds, we think, certainly for the next two or three years, it’s the way to go.”

The category is also considering an invitation to race in New Zealand next year as part of a sportscar festival at Hampton Downs. 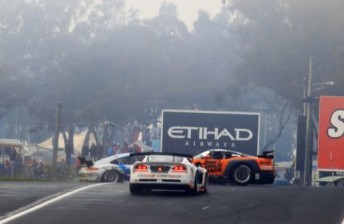 The AGTC will take on a new direction next season

The AGTC organisers will attempt to more closely align the category with the Stephane Ratel Organisation’s highly successful FIA GT3 European Series next season. Starting in 2012, all vehicles homologated for the previous season’s FIA GT3 Series will be eligible to race in Australia – replacing the current system which does not allow for newer versions of existing cars to enter.

FIA GT3 vehicles that are three years old will be eligible for the GT Challenge class, while it is hoped that a third division, named GT Sports, will attract FIA GT4 specification vehicles.

Parity adjustments made in Australia will now follow the FIA class’s Balance of Performance adjustments, with the concept of individual success ballast being abandoned.

In addition to the technical parity, varying the stationary time required for each car at compulsory pitstops (trialled at Phillip Island recently) is likely to be implemented across all rounds where the one-hour race format is used. The differing of stationary times, which are calculated based on the length and duration of the race, the driver’s qualifying position and time, and the driver’s classification (seeded or unseeded) and championship position, is seen as  a preferable to technical restrictions for ensuring that drivers not fast enough to win still have a chance of victory.

Organisers claim they are expecting to see several new cars enter the championship in 2012, including the likes of the Ferrari 458, Lamborghini Gallardo LP600, Nissan GT-R and Porsche 911 GT3 R, while Audi and Mercedes are said to be working hard to sell more of their cars into Australia.

Audi pilot Mark Eddy leads the 2011 Vodka 0 Australian GT Championship following the penultimate round at Bathurst, with the season set to conclude at Sandown next month.