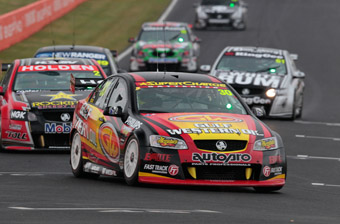 Lucas Dumbrell hopes to have his 2012 plans sorted by the end of this month.

The single car V8 Supercars team owner is sorting through his final plans for next year, which include locking in his driver, chassis and sponsorship package.

Dumbrell, the youngest team owner in V8 history, is in the discussions with current driver Warren Luff about keeping him on board for a second season with the team.

He is also set to decide where he sources the chassis for the Gulf Western Oils Commodore – stay with the Walkinshaw Racing car or switch to a current specification Triple Eight Race Engineering entry.

“I will be able to confirm things before the end of October,” Dumbrell told Speedcafe.com.

“I’m hoping to know who is on the car, what car it’s going to be and who is driving it by the Gold Coast.”

Dumbrell hints that Luff is the leading contender to keep his seat next year.

“We’re talking to Warren quite a lot about next year about if he will continue on, and I hope he does stays,” he said.

“I’ll stay with Holden for sure, so I just have to work out which Holden manufacturer it will be.

“The two biggest players are Walkinshaw Racing or Triple Eight Race Engineering, but I need to work out what I have to spend before I commit to my future.”