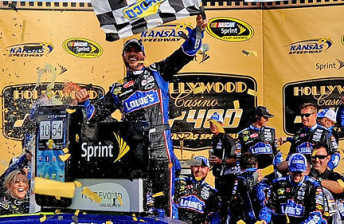 Jimmie Johnson has increased his chances of winning a sixth consecutive NASCAR Sprint Cup Series crown by taking victory in the Hollywood Casino 400 at Kansas.

The result sees Johnson, who had won just one of the season’s first 29 races, move from fifth up to third in the points standings.

Just four points separate the top three heading into the final six races, with Edwards having taken the lead from Harvick in Kansas despite falling a lap down early in the race.