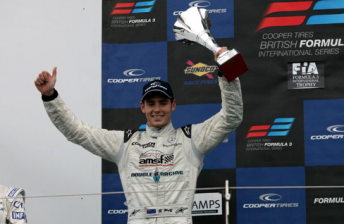 Roland Dane will head to the UK next week to help secure Scott Pye’s future in international open wheel competition.

Dane, the team principal of Triple Eight Race Engineering, has been a supporter and adviser of Pye’s over the past few seasons.

This year, Pye has competed in the British F3 Championship this year, driving for Double R Racing. After overcoming the steep ‘wings and slicks’ learning curve in his maiden season, Pye has impressed of late, wrapping up the season last weekend in Silverstone with a second place finish.

Pit talk in Bathurst suggested that Pye could abandon his F1 dream and head back to Australia to compete in Dane’s Monster-backed Fujitsu V8 Series entry, but the champion V8 team owner says that the priority is to secure Pye’s place in international competition.

“We want to keep Scott over in Europe,” Dane told Speedcafe.com.

“I should be in London next week. Scott came second in the Formula 3 race, the last event of the season, and now that he’s gone through his learning cycle, it would be a shame not to have a red-hot go at the title next year. For us, that’s the plan.”

“If you look at what the new champion Nasr did this year, he was in a similar position to Scotty last year,” Dane explained.

“And look how Nasr performed this year – he has dominated.

“Scott has learnt the series now, learnt slicks, wings, aero cars, so it would be a shame not to take advantage of it.”

At Phillip Island, Dane confirmed that his entry in the Fujitsu Series would remain in 2012, but without its current driver Andrew Thompson.

While Dane acknowledged that a vacant spot in his V8 development car could be a place for Pye, he maintained that the focus was to keep him overseas.

“We haven’t decided who is in our Fujitsu car, but at the moment, our focus is on keeping Scott in Europe, in F3, but beyond.

“There’s a few young blokes in the Fujitsu Series at the moment who aren’t in good equipment, and I’m looking at them right now.”