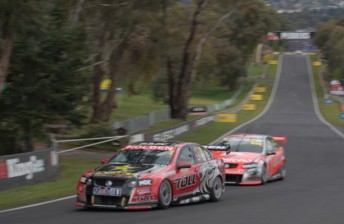 Tander and co-driver Nick Percat won the race despite the best efforts of Lowndes, who closed a 5.6s margin over the final 13 laps to finish just 0.29s behind the Holden Racing Team Commodore.

Tander, who admitted that the Holden Racing Team Commodore’s steering had been binding more than usual through Reid and McPhillamy Park after Percat made contact with the Griffins Bend exit wall in his second stint, said his car was lacking pace over the final 23-lap period.

“The car was very good for the majority of the day except in that last stint,” said Tander.

“We made a change for the second last stint and managed to pull a gap on Jamie (Whincup). We made another change for the final stint with the cloud cover and the car wasn’t quite as nice.

“But in the end we got to the end first and that was what matters. We got to the lead when it counted and we weren’t going to give it up.”

Having lost a chunk of time with a lock-up and off on at The Chase on Lap 153, Tander was forced to defend heavily into Griffins Bend on the final lap – an area that he’d noted as a key weakness.

“I had to make sure we were fast in the key areas of the track to make sure they couldn’t have a go at us,” said Tander.

“I felt their car was quite good on the straights, so I had to get a good run onto Mount Straight and out of Turn 2 up to The Cutting. He had a sneaky look up at the tree (Reid Park) – I thought it was going to be fun if he tried to come through there…

“Then it was just a matter of getting out of the Elbow as clean as possible, and then it was going to be a very wide car in the two key braking areas at the end of the lap. The rear tyres were well past their best.”

Having made his charge on Tander without the assistance of a Safety Car in the closing stages, Lowndes said he was powerless by the time he got to the #2 car’s bumper.

“I had wheelspin coming out of corners where I really needed drive to have a go at Garth,” said Lowndes of the final lap.

“He did a really good job of running the lines that he needed to and hitting the marks he needed to. The oil on the inside line into The Chase (dropped by Rick Kelly’s car) didn’t help because it made it one-line into there.

“I tried to use the kerb through The Chase and get out of there faster, but again I didn’t have the drive I needed. If there was an opening or half an opening I would have looked at it, but I didn’t want to put the car in the wall after what we’d been through, and obviously I didn’t want to get caught up with Garth.

“If I’d got to him earlier, it may have been a different situation, but for that lap where I’d got to him, there really wasn’t much I could do.”

For Percat, watching from the pit bunker was a highly stressful affair.

“I had to find a seat in the garage – I didn’t know what was going on,” said the South Australian.

“I had Dad there holding on to me, he went a bit white… it was all a bit intense for me, especially when Craig was coming.

“It’s a credit to those boys (Lowndes and Skaife), to come from where they did and have a serious go at us there at the end was impressive.

“But GT, I’m not sure how he did it. I knew what the car was like at the end of its tyres and he went even further, which was interesting.

“I just have to thank Al (Alistair McVean) and those boys on the radio. As soon as I had that little issue earlier in the race they were instantly on the radio to settle me down so I could press on.”