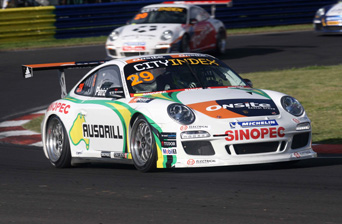 Patrizi started from pole position and led the opening laps, however, unlike the two Saturday races, he didn’t remain at the front. Baird soon gained the lead and eventually won the race – his first win in the category at Mount Panorama.

Jonny Reid, who struggled early in the weekend, returned to form with second place and posting the fastest lap of the race. Reid finished ahead of Steven Richards, Michael Patrizi, Daniel Gaunt, Matthew Coleman, Tim Leahey and eighth placed Ben Barker, who started second but ran into the run-off area at the first corner of the race, dropped to last position.

Patrizi’s fourth place in Race 3 saw him finish on top of the round points ahead of Richards, Baird, Barker, Gaunt and Reid.

“I’ve very happy with the round win. McElrea Racing did a great job again,” said Patrizi.

“We put our best foot forward in both races yesterday and we knew today was going to be a little bit of a struggle with the tyres that we had. I locked a tyre early in today’s race when I was in the lead so I nursed it, and then I had a massive lock up after that. My engineer told me I had to finish seventh or better to win the round so I buttoned off and brought it home.

“The second win yesterday was a lot easier than the first win in my head. I haven’t had the equipment to win a race in a while so I’m confident and looking forward to the next round.”

Twigg’s results gave him with the Elite Class round win after two class wins in Saturday’s races, finishing ahead of Smollen, Middleton, Kelly, Flack, Gray and Koundouris for the round.

“It was a good weekend. You can’t complain about having a win but I reckon I was off the pace a little this weekend. I usually like to run with Coleman and I wasn’t there. The points are in the bag now, so I’m happy with that, but I could have performed a bit better,” said Twigg.

Max Twigg remains in the lead over Elite Class with a healthy gap over James Koundouris, Flack and Kelly.

Porsche City Index Carrera Cup Australia will next visit the street of Surfers Paradise for the Armor All Gold Coast 600, October 21-23.