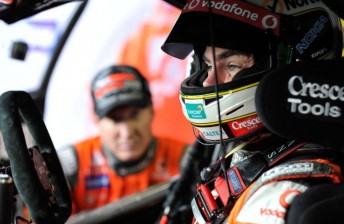 Craig Lowndes and Mark Skaife were left to rue several delays in today’s Supercheap Auto Bathurst 1000 that saw the reigning winners continually having to fight back through the field.

CLICK HERE for comments from Garth Tander, Craig Lowndes and Nick Percat on the tense finish

With Skaife having been passed by Andrew Thompson in TeamVodafone’s #88 car in the first stint, pitstops proved a major issue for the Skaife/Lowndes entry.

As each team is only allowed to service one car at a time, #888 was forced to queue behind its sister car when Safety Cars on Laps 40, 63, 86 and 113 triggered wide-scale pitstops.

“It was one of those situations – when you’ve got two fast cars circulating around the same position it’s always difficult,” said Lowndes, who received a Bad Sportsmanship flag during the race for slowing on the way into pitlane in order to minimise the track position lost due to the queuing problem.

“Every time we were in our pit window the Safety Car came out (triggering pitstops). I’m not sure how much time we lost, but we lost a fair bit just sitting there waiting.

“It is frustrating, because you want to service the car, do your driver change and just get things done, but you’ve got to wait for that lead car to get out of the way.”

“It was one of those things,” echoed Skaife. “You can’t go against the priority of the lead car, and the circumstances were such that we had to queue on multiple occasions.

“What it did for us was that it put us deep in the field, which meant we had to work the car hard to get back through. That meant it was a pretty tough gig.”

The queuing situation led to TeamVodafone attempting to split its strategies, calling Skaife into the pits for the car’s fifth stop on Lap 97 – just 11 laps after its previous pit visit.

The alternate plan was dashed when another Safety Car (for David Besnard’s crash) appeared on Lap 113 – locking all of the key runners back onto the same strategy.

Ironically, the demise of the Whincup/Thompson car also brought Lowndes and Skaife undone.

When car #88 began cutting in and out with electrical problems on Lap 138, Lowndes found himself in a line of cars travelling slowly behind Whincup across the top of the Mountain – which would cost #888 several positions.

“I understand the boys had no radio communication with him (Whincup), and he was obviously desperate to get the car back to the pits and get it going again,” said Lowndes of the chaos.

“I was following Frosty (Mark Winterbottom), and he (Whincup) just got the car going right in front of us. I think he was doing about 5 or 10km/h, which stacked us all up, allowing the other guys to have an almost FOC (free of charge) stop.

“It was frustrating for us. The boys were trying to radio Jamie to get him out of the way. I couldn’t go past him, the boys were telling me to go past him but I had Frosty in-front of me, so there was a lot of radio communication going on at the time.”