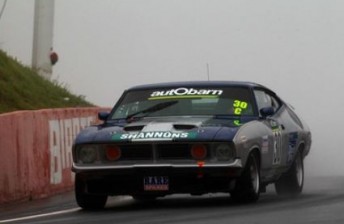 Glenn Seton across the top of The Mountain

Glenn Seton has taken his first ever win at Bathurst in Race 3 of the Touring Car Masters.

The two-time Australian Touring Car Champion, who drove in his final Supercheap Auto Bathurst 1000 last year, was holding off a charging Jason Richards on the final lap when the race was red flagged due to an accident.

The crash saw Andrew Whiteside’s Ford Mustang make heavy contact with the left-hand wall at the exit of The Chase following a minor touch from the Chrysler Charger of Mick Wilson.

Seton had wrestled the lead from a fast-starting Eddie Abelnica as the field headed down Conrod on the opening lap, and was never headed from there.

“It was a lot of fun, it’s great to get a win here” Seton told Speedcafe.com after the race.

“Racing with Jason, John Bowe and Jim Richards was great, it brings me back to a time when I was racing those guys every week. To get back to that sort of competitiveness against those guys is great.”

“It brings back the old history of touring cars in the late 60s and early 70s. It’s very popular with the public out there, because it was a great era. The cars move around a lot because they’ve got a lot of power, very small tyres and are very heavy.

“The people involved are very friendly so it’s a good atmosphere as well, so I’m really enjoying the class.”