The remains of the Jim Beam Black Falcon

On lap 113, the #17 Jim Beam Black Falcon collected the tyre wall at unabated speed, ripping open the fuel cell and setting off a huge fire.

The first started on the race track before making its way to the race car.

Besnard escaped the flames and was taken away by the medical car. He is currently in the medical centre at the circuit.

Lead driver Steve Johnson said that his heart was in his mouth when he saw the footage of his car in flames.

“The main thing is David looks like he got out of the car,” Johnson said.

“We’re still not sure what happened there. We just did a pad stop and the car wasn’t the best but we were working on it all day. 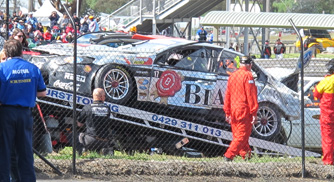 The #17 Falcon taken off the back of the truck

“We muscled the thing back up into seventh spot there from the back of the pack and looked like we were on for a good fuel strategy as well but that has obviously put pay to our day.

The race has restarted after six laps under Safety Car conditions to clean the debris from the circuit.