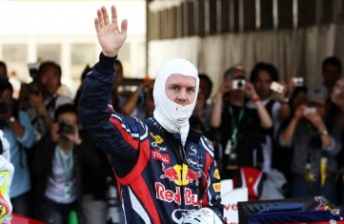 Sebastian Vettel has snatched pole at Suzuka from under McLaren’s nose ahead of tomorrow’s Japanese Grand Prix.

Vettel clinch the top spot by a mere nine-thousandths of a second, pipping Jenson Button to the top slot.

Button’s McLaren team-mate Lewis Hamilton also looked like he had a chance at pole until he got mixed up with the Mercedes of Michael Schumacher and Red Bull Racing’s Mark Webber. It meant that he wasn’t able to get to the line in time for a final lap, keeping him in third place.

Behind Vettel and the two McLarens was Felipe Massa (Ferrari), ahead of team-mate Fernando Alonso.

Australian Webber will start the Japanese Grand Prix from a disappointing sixth, while Schumacher missed his chance at a final lap when he slipped off the track avoiding Hamilton.

Neither the Renaults of Bruno Senna and Vitaly Petrov or Sauber’s Kamui Kobayashi opted to do any Q3 laps, preferring to conserve tyres. They will start in positions seventh to 10th.

See below for a full list of starting positions for tomorrow’s Japanese Grand Prix at Suzuka.