V8-inspired cookbook for a good cause

V8-inspired cookbook for a good cause 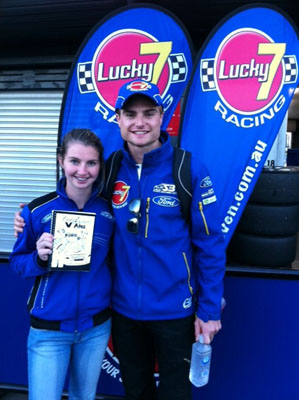 Tim Slade’s sister has created a V8 Supercars inspired cookbook – all in aid of a great charity.

Lucy Slade, 16, has created a cookbook – 12 months in the making – for a school project.

Slade Jr is selling the cookbooks at Bathurst this weekend, raising funds for third-world country Laos, with her school pledging $20,000 to a local Laos village.

Tim Slade, who will start this weekend’s Supercheap Auto Bathurst 1000 from 15th place on grid, says that

“It started out as a school project, but it grew pretty quickly,” Slade told Speedcafe.com.

“Lots of people helped her out and she put a lot of hard work into it.

“I know who hard it is to get us race drivers to do stuff. She was hassling me, and I’m her brother!

“She did all of the ground work herself. At her age, I would have been terrified to ask people like that for that stuff. She’s done well.”

SPEEDCAFE.COM’S TIP: If you see young Lucy, or her father Gil in the paddock this weekend at Bathurst, say hello, buy a copy of ‘Lucy’s Sweet V Ates’ and donate to a worthy charity.