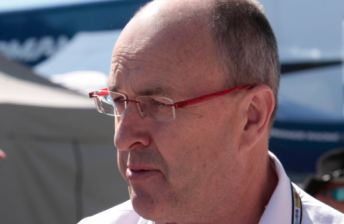 V8 Supercars chairman Tony Cochrane says that the final spot on the 2012 V8 Supercars calendar, currently listed as ‘TBA,’ will definitely be filled.

Cochrane would give little away on the identity of the venue for the penultimate event of the championship, to be run a week after the Yas V8 400 at Abut Dhabi in November.

A second overseas event will help to justify the cost of sending the championship halfway across the world.

Speedcafe.com understands that the TBA event is unlikely to be run in the Middle East region, ruling out the likes of Qatar, Bahrain and Dubai.

India is also understood to be an unlikely venue, although it is being considered for the expanded 2013 calendar.

This leaves South East Asia as the most likely region for the extra event, which includes countries like Malaysia, Singapore, Indonesia, China or perhaps an earlier-than-expected visit to the Philippines.

Regardless, Cochrane says that there is only one venue under consideration for the TBA event and it will be “east of Turkey.”

“It is well and truly down the track,” said Cochrane of filling the empty slot.

In regards to the shift of the Abu Dhabi V8 event to November to run as a support class to Formula One, Cochrane says he’s looking forward to its benefits.

“We think it will be a great experience for us,” the V8 chairman said.

“Opening the season in the Middle East was challenging in many ways, and particularly challenging for our fans who obviously enjoyed the experience of us opening in Adelaide.”

The Abu Dhabi event will be held during the day (local UAE time), meaning that the race will be broadcast at approximately 10-10.30pm in Australia.