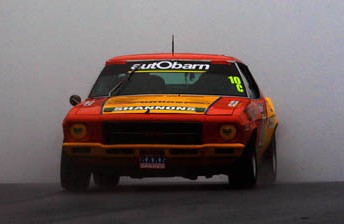 Jason Richards in his HQ Holden

With just one practice and the Top 10 Shootout for V8 Supercars at Mount Panorama today, support classes took centre stage.

In the Fujitsu V8 Series, Andrew Thompson extended his title lead with his second race win for the weekend.

CLICK HERE for the report from the second race of the Fujitsu V8 Series.

Carrera Cup was all about one man – Michael Patrizi. The West Australian took his first race win in the Porsche class before backing it up with another win in Race 2.

In Australian GT, there was a whole host of mixed conditions and results.

Race 1 was taken out by the Mercedes AMG SLS of Peter Hackett and the experienced driver looked on track to dominate the weekend.

Things turned sour in Race 2 when a shower prior to the start of the second race saw a bunch of drivers opt for wets instead of slicks.

With conditions turning out to be not quite wet enough for grooved tyres, Mark Eddy in his Audi R8 came through for a resounding win, beating home eventual round winner Klark Quinn (Mosler).

The Auto One V8 Utes saw drama unfold at almost every turn. VIP Petfoods-backed Brad Patton collect the tyre wall heavily at the exit of The Chase.

Also in the wars at The Chase was Jake McNally who out-braked himself and collected a couple of rivals.

The Chase saw one last drama in the second race when former class champion Jack Elsegood spun his Coopers Falcon at high-speed, narrowly missing other competitors.

In the Autobarn Touring Car Masters, the Bathurst experts came to the fore.

In the second race, Jim Richards steered his Falcon Sprint to the win ahead of Seton, Richards, Bowe and Brad Tilley (Falcon XY GT).