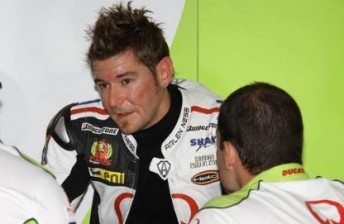 Australia will have two riders on the grid at Phillip Island next weekend when the Australian Motorcycle Grand Prix takes place.

While Casey Stoner focuses on securing his second World Championship with Repsol Honda, his 29-year-old countryman Damian Cudlin will again fill in for the injured Hector Barbera at the Aspar Ducati team.

Cudlin made his MotoGP debut at Motegi a week ago, where he replaced Loris Capirossi, and says he’s excited about the opportunity to return.

“It’s another fabulous chance,” said Cudlin of the confirmation that he will race at Phillip Island.

“I honestly can’t believe it yet. A week ago I raced for the first time in MotoGP and it was already a real shock.

“I had never raced at Motegi before and I had to learn a lot of things in a very short time. We had a lot of work.

“After that experience I’m sure that at Phillip Island I will start the Grand Prix at a higher level. I know the track and that will help me get there with a lot of confidence.”

Cudlin qualified 18th in a 19 bike field at Motegi, before crashing out of the race while running 14th.