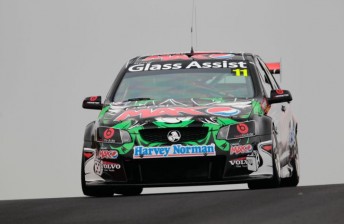 Preparations for this afternoon’s Top 10 Shootout were skittled this morning as rain returned to Mount Panorama.

Water began falling around the circuit as the V8 Supercars field headed out for Practice 6 – the final hit-out before this afternoon’s one-at-a-time run-off.

Alex Davison was second on 2:20.17s, while the Lee Holdsworth/Greg Ritter entry was third fastest before times drifted towards the 2:30s bracket.

“I was just lucky that I got a clear lap in at the start of the session when it the track was at its quickest,” said Simonsen after the session.

“But the car has been working well all weekend, and I think we’re looking good in wet, dry or chageable conditions – so we’re looking forward to it.”

The 33-year-old stopped short of claiming that the Pepsi Max Crew Commodore should be considered a contender for victory.

“I don’t know, we’ve had some good runs in the past, we came sixth last year, and obviously I hope we’ll end up on the podium somewhere but we’ll see what happens,” he said.

The majority of teams spent the session bedding in their race engine and driveline packages, in addition to roading brakes and wet tyres, and practicing driver changes.

Jim Beam Racing’s Matthew Halliday was the only casualty of the wet conditions, bogging the #18 Falcon in the gravel trap at pit entry with just under four minutes of the session remaining.

See below for the Practice 6 result