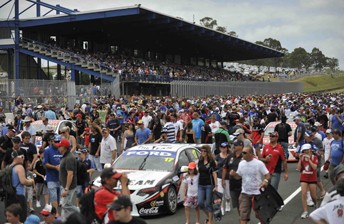 The V8 Supercars pre-season test session looks set to go ahead in 2012, but V8 Supercars chairman Tony Cochrane says that the location and the date are yet to be confirmed.

Despite recent reports that the test will switch from Eastern Creek to Sandown on February 14, Cochrane says that nothing is confirmed, although likely to proceed.

“It hasn’t got a confirmed date, but we are looking to do it again,” Cochrane said of the chances of the pre-season test returning.

“It was a magnificent success. For anyone who was there at Eastern Creek earlier this year, there was a huge fan turnout.

“We are looking to repeat that. Exactly where and when has not been fully locked away, despite some of the speculation I have read in the media.”

Cochrane says that if the event happens, it will not be at Eastern Creek.

“We’d like to move that function around, we don’t like to keep it to one city because that’s unfair to other fans in other cities who are forced to travel to it.

“If we do it, it will move to another market.”

CLICK HERE for Speedcafe.com’s news story on the announcement of the 2012 V8 Supercars Championship calendar.