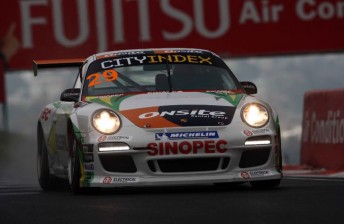 Michael Patrizi cuts through the gloom at Bathurst

The West Australian qualified second for the race and gained the lead at the start before charging to a lengthy gap over the field.

Baird started from pole position but jumped the start. After the championship had a rule change for the start line infringement, Baird was handed a five-second penalty after the race instead of a drive through penalty, pushing him from third to fourth.

“I got an awesome start,” said Patrizi. “Baird jumped the start which made me almost jump it myself. From then on I pushed and got a great lead. I made a mistake so I backed off and really cruised those last four or five laps.

“I’m stoked. The McElrea boys have done a fantastic job and had a lot of faith in me getting me into the championship. I know it’s only a win in the first race of the weekend, but I’m pretty confident moving forward.

“I don’t feel like we’ve shown our true pace this weekend so I can’t wait for the coming two races.”

Jonny Reid suffered battle damage early in the race which dropped him down the order to eventually finish 13th.