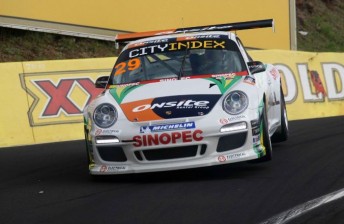 Michael Patrizi heads through The Dipper

Michael Patrizi has claimed his second win in as many races in Porsche City Index Carrera Cup Australia at Bathurst.

The West Australian led from the start of the nine lap race, which was started behind the safety car after Jeremy Gray spun his GT3 Cup Car on the warm-up lap.

Patrizi won the race by 1.17s from Briton Ben Barker, who passed Bathurst veteran Steven Richards on the second lap of the race.

Race 3 for the Porsche City Index Carrera Cup Australia will be held on Sunday morning, the final race before the Supercheap Auto Bathurst 1000.