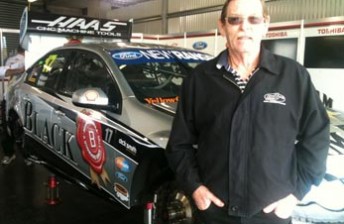 After a number of years away from Bathurst, Dick Johnson Racing’s longest-standing full-time employee has returned to Mount Panorama.

Roy McDonald was first employed by Johnson in 1977 when the Queensland legend raced for the Bryan Burt Ford team. McDonald started full-time with Johnson in 1980 and has been there as a fabricator ever since.

McDonald says that Johnson’s success over the years comes from his loyalty that inspires those around him to dig deeper.

“I think that we probably put a lot of pride into what we do,” McDonald told Speedcafe.com.

“Dick has always been an easy person to get on with, and we just enjoy putting in and do the best we can. It’s just been a great team. There has been some good people over the years working for us and its always a good atmosphere.”

After 31 years with the V8 legend, McDonald has seen the highs and lows. McDonald’s biggest high was in 1981 when Johnson won his first Australian Touring Car crown. While the fact that Johnson won was the moment that everyone remembers, McDonald has his own personal highlight.

“My on track highlight would be 1981 when I drove the True-Blu car around Lakeside after winning the race,” he said.

“It’s definitely the highlight of the eight championship wins and the three Bathurst wins.

“Back then, the drivers would take the cars around to the start finish line and the mechanics used to drive them back to the pits.

“Driving that lap after winning the championship was quite a thrill in my life.

“It was great. it was just a good team effort from everybody, and a thrilling race with a huge crowed, we had a good time.”

McDonald is Johnson’s longest-standing employee, and he has a piece of paper which has been around for almost as long.

McDonald holds a catalogue of employees’ names who have worked for DJR.

“In 1980, I grabbed a sheet of paper and wrote down every name or every person that has worked at Dick Johnson Racing,” he said.

“I’ve been there the longest, and there’s another guy by the name of KC (Keith Chesterton) since 1985 – he has got some laps up as well.

“There’s been a few people that have gone and come back. They get their name their twice. There was another guy who now works at Stone Brothers – he was been and gone three times!”