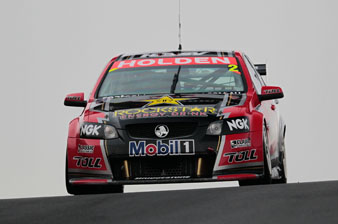 A protest from the Toll Holden Racing Team regarding the running of the mixed condition Top 10 Shootout has been turned down by the stewards.

Provisional pole sitter Garth Tander (Toll HRT), as well as Mark Winterbottom (Orrcon Steel FPR) and Jamie Whincup (TeamVodafone) were denied the chance of taking pole position at Bathurst today when a brief rain shower made the circuit wet enough to give them no hope of taking the top spot.

HRT team manager Mike Henry approached the stewards after the session to “clarify” the ruling on running the shootout in mixed conditions.

He says that the famous Bathurst shootout was held in an unfair manner.

“I just wanted to clarify the situation,” Henry told Speedcafe.com.

“For us, we put it on the provisional pole and now we’re starting from the fifth row of the grid, and that is pretty unfair.

“Clearly the bloke upstairs isn’t riding on us, or maybe he likes Pepsi!”

Henry emphasised that he didn’t want to take any of the accolades away from pole-sitter Greg Murphy, suggesting that the session could have been delayed to offer all 10 drivers the same chance.

“It’s disappointing. We’re not bitching or moaning, we just wanted to clarify it.

“I’m not taking anything away from Greg Murphy, that was an excellent lap, but I see no reason why they couldn’t have delayed the session. You could see the rain was only here for a moment.”

The last time a mixed condition Top 10 shootout was held (Pukekohe 2003) saw the positions reverted to the provisional standings. Ironically, Greg Murphy was the man who benefited that day …

The V8 Supercars will be on track again tomorrow at 7.45am for the traditional morning warm-up ahead of the Supercheap Auto Bathurst 1000 which kicks off at 10.30am.